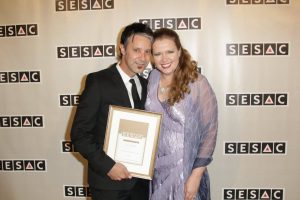 Evan Frankfort and SESAC’s Erin Collins at the Award Show

At this year’s SESAC Film & Television Composers Awards Dinner composer Evan Frankfort who is part of our Scoring Team was honoured by his PRO SESAC with two awards for his scores for the TV shows “The 100” and “Game Changers with Kevin Frazier”.

Here is what he said afterwards in an interview about the scoring process of “The 100”:

For The 100, I create sounds for months before I even begin writing. I think of the world we’re in and create a palette with those new sounds. In the first season, we start in space with higher tech and when we reach the ground it becomes primitive. The trick is to thread particular elements between worlds so that the characters stay emotionally represented in the music.

Season 2 had lots of claustrophobia in the underground world of Mt. Weather… that meant a new palette again. While I do like to use recurring themes for people or places, I like when elements recall a feeling. It can liberate music from a character and just represent death, loss, hope, etc. In other words, to avoid feeling the mechanics, it can be great trying things that seem to not connect to a scene in theory. There’s an endless number of ways to do something great and I’m always interested in finding what else can make a moment special

The trick is delivering on time. I have 4 days to score 38 minutes so I have to go with my first instinct most of the time. I have hundreds of tracks so mixing is one of the bigger challenges. I love to tweak but there simply isn’t time. I’ll print 7 stems for flexibility at the final mix. While I work on The 100, it’s 18 hour days, 7 days a week.

You can watch the opening credits featuring Evan’s Main Title Theme for “The 100” below and read the full article on SoundtracksAndTrailerMusic.com.